Skip to content
Around the world in search of home. 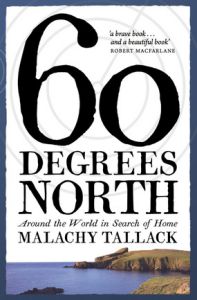 I always said that, in the unlikely event of my ever going on a long sea cruise (my idea of hell), I would want to follow the extended route the Vikings took across the Atlantic: Denmark/Sweden/Norway, Orkney, Shetland, the Faeroes, Iceland, Greenland, Newfoundland. So far, the only one of those places I have visited is Shetland, on an archaeological dig in 1985.

Malachy Tallack was brought up in Shetland, whose major coordinate of latitude gives this book its title. Similar in some ways to imagined Viking voyage, Tallack always wondered what it would be like to travel all the way around the world, visiting every country through which the 60°N parallel passes. Unlike me, Tallack eventually went on his trip. This book describes what he saw.

Tallack didn't travel round the world in a single trip, but made various expeditions to: the southern tip of Greenland, Canada's Northwest Territories, Alaska, Siberia, St Petersburg, Finland, the Aland archipelago, Sweden, and Norway. Very different places, united by a common latitude, and, to some extent, by a common northernness.

60 Degrees North is an entertaining travelogue, but also a personal examination of what ‘home’ means to its author. It's as if Tallack had to get out of Shetland for a while to discover how he felt about the place.

Disclosure: I received a free review copy of this book from the publisher. I have also previously contributed an article to the The Island Review website, which is edited by Malachy Tallack.