Skip to content
A medium-sized mass of potted nonsense. 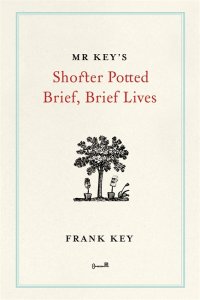 It would be incorrect to refer to Mr Key's Shorter Potted Brief, Brief Lives as the eponymous author's magnum opus on at least two counts, namely:

But to refer to this work as a minumum opus would be to do Mr Key a considerable disservice. The author has expended near superhuman effort researching, digesting, trimming down, condensing, synopsising, encapsulating, and generally précising the lives of several hundred individuals, whittling down their biographies to the one or two golden nuggets that we really need to know about them. So let's split the difference: Mr Key's Shorter Potted Brief, Brief Lives is, without putting too fine a point on it, a medium opus.

Think of this book as the Dictionary of National Biography with all of the superfluous chaff removed. We don't need to know, for example, that the helicopter magnate Alan Bristow was born in Balham and raised in Bermuda, that his middle name was Edgar, that he was present at the evacuation of Rangoon, and that he was part of the unsuccessful bidding consortium that precipitated the Westland Affair; all that we need to know about Bristow, as Mr Key encapsulates in the succinctest of nutshells, is as follows:

Bristow, Alan (English helicopter entrepreneur, 1923–2009). As a test pilot, Bristow survived innumerable helicopter crashes, including six engine failures in one day. He regularly got into fights, and once threw Douglas Bader into a swimming pool, calling him a ‘tin-legged git’. At the age of seventy-five, he started a new business producing his patented water bed for cows. See Chesterton, G.K.

Cows, you will be pleased to hear, feature rather prominently in this book, as do pigs, swans and owls. What more could you possibly want?

I would have ended my review at this point, but there are a number of other considerations that Hooting Yard aficionados might reasonably expect to see covered in a book review, namely:

Characters: The book runs the full gamut of characters from Lascelles Abercrombie to Eleonore Zugun. (No, me neither.)

Does the book have heft?: Yes it does.

Structure: The entries are in alphebetical order by surname, except when the subjects do not have surnames (e.g. Theseus, whom Mr Key sensibly files under ‘T’, rather than the more strictly correct ‘Θ’).

Plagiarism or quotations: There can be no accusations of plagiarism: Mr Key is punctilious in listing all of his sources, and provides an extensive bibliography.

Bookcase location: Were it to be placed on a shelf, Mr Key's Shorter Potted Brief, Brief Lives should by rights stand shoulder to shoulder with its acknowledged inspiration, John Aubrey's 17th-century masterpiece, Brief Lives. But why stand such a useful book on a shelf, when you can carry it with you wherever you go? To this end, the book has been sized to fit neatly inside a standard-issue pippy bag.

As I said, highly recommended.

Disclosure: I have had occasional online contact with Mr Key, and am mentioned in the acknowledgements of this book, having provided him with vital information about a certain eminent nineteenth-century naturalist.