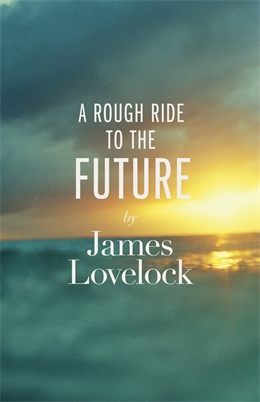 I was prompted to read A Rough Ride to the Future after being pulled up on Facebook by a well-known popular science writer. The topic in question was nuclear power (which I strongly support), in which I described James Lovelock as ‘an embarrassing ally, with all that Gaia stuff of his’. The science writer correctly suspected that I had only read about the ‘Gaia stuff’ second- or third-hand, and assured me that what Lovelock says is quite different from the ‘hippy dippy version’ popularly portrayed.

With the exception of the Gaia stuff, from what I'd heard of Lovelock, he always sounded like a very interesting and intelligent man, who is clearly on message about nuclear power. He is also a strong advocate of scientists' working across disciplines—which has to be a good thing. So I thought I should, perhaps, give his latest book a chance.

Reading A Rough Ride to the Future confirmed much of what I already thought I knew about Lovelock. He is, indeed, an extremely interesting and intelligent man, who has a knack for looking at problems in a different way to other people. As you read his words, he seems to say plenty of things you already know—or thought you knew—but he expresses them from a totally different perspective. Seeing familiar concepts described from a different perspective can be very useful, but it does sometimes make reading Lovelock difficult, as you try to translate his words back into your own world-view, to check whether what he's saying makes any sort of sense.

There's a lot of food for thought in this book. A Rough Ride to the Future did genuinely make me re-consider my own position on some important issues, especially with respect to global warming. One key point I took from the book—although I don't know if it's true—is that most people modelling climate-change aren't adequately taking into account the influence of living organisms on climate. More surprisingly, perhaps, Lovelock also claims that the complexities of what's going on in the world's oceans aren't being modelled in anything like the detail of those going on in the atmosphere. If Lovelock is right about this—I suspect he might be right, but somewhat overstating his case—then clearly we have a problem with climate-modelling that needs to be addressed as a matter of urgency.

As for ‘that Gaia stuff’, Lovelock is as utterly infuriating as I expected. The idea of treating the whole of the planet as a single ‘living’ system is an interesting, and quite possibly very useful, metaphor. But Lovelock keeps referring to ‘Gaia’ as if the metaphor is literally true. (Yes, I appreciate that's what you're supposed to do with a metaphor, but he tends to take things way too far.) The index card I used as a bookmark was soon covered in exasperated scrawls. Here's a selection of my notes, to give a flavour of just how frustrating I sometimes found this book:

As you will gather, I found some of this book extremely exasperating. Lovelock himself explains most of my exasperation—although he prefers to think of it as confusion—on p.81:

Some of the difficulties in accepting Gaia come from confusion over my use of the word ‘goal’. Engineers and most physicists use the word, or its synonym ‘aim’, openly and without embarrassment [aside: I'm not sure if they do] when describing a dynamic system that self-regulates and sustains a constant state, and strongly resists perturbation from that state. […] Both spinning tops and Gaia are dynamic systems; the top's goal is to spin on its axis of rotation; Gaia's goal is to maintain a habitable environment for whatever is its biosphere.

The semantic problem arises because the definitions of ‘goal’ and ‘purpose’ overlap. Purpose usually implies conscious action, intelligently designed. But goal can be an engineering or systems science metaphor [my emphasis], and is only concerned with reaching the stable state of a dynamic system, not with an explanation of how the state was reached.

I think Lovelock is plain misguided here: most people—including engineers and physicists—do not make the same subtle distinction as he does between the words ‘goal’ and ‘purpose’; and ‘purpose’ does not usually imply intelligent design—although it sometimes can. So, to treat the two words as if they have clear, albeit subtly different, meanings is to invite confusion. In other words, if Lovelock can see that there is clear confusion over the words he uses, why not use less confusing ones?

Even though, in the passage quoted above, Lovelock clearly seems to acknowledge that Gaia is a metaphor—it is the only time, as far as I could see, that he seems to acknowledge it in this book—for much of the rest of the book, he treats the metaphor so literally, that it begins to sound like nonsense. That's no way to sell a metaphor to anyone.

But don't let this frustrated, exasperated rant put you off. I did genuinely enjoy A Rough Ride to the Future. It gave me plenty to think about, as well as some new perspectives on matters I have already thought about. Bear with it, and you will probably, like me, get a lot out of it—especially if you can stop your eyes glazing over, and your brain reeling, whenever Lovelock starts harping on about ‘all that Gaia stuff of his’.

Disclosure: I received a free review copy of this book from the publisher.