Skip to content
DNA and the ultimate forensic record of evolution. 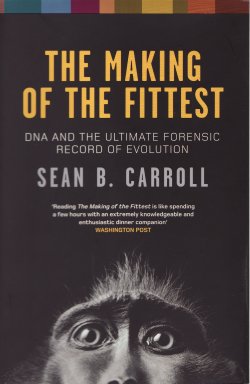 I enjoyed The Making of the Fittest very much indeed. It gets into details, and requires a higher degree of concentration than many other popular science books. There's even some mathematics involved—but don't let that put you off. If you pay attention, this is a eminently readable book.

The main theme of The Making of the Fittest is how modern DNA analysis provides overwhelming evidence in support of evolution by means of natural selection. This is an independent form of evidence that was totally unavailable to Darwin, but it backs him up to the hilt. Organisms' structures, including their very DNA, reveal their history. While Darwin correctly observed that ‘Man still bears in his bodily frame the indelible stamp of his lowly origin’, Carroll gives a more modern take: ‘many genes bear the scars of natural selection’.

Throughout the book, Carroll provides numerous examples of how accidentally duplicated segments of DNA have been co-opted—on many different occasions—to evolve new and improved adaptations, such as colour vision, poisonous/venomous neurotoxins, and anti-freeze. Carroll is very good on natural selection being, in addition to a force for change, a force for maintaining the status quo by weeding out disadvantageous mutations. He is also excellent on how the same adaptation can be coded for by different DNA sequences. One of his key arguments is that:

DNA sequences that encode for the same protein sequence but that are substantially different are unmistakeable evidence of natural selection allowing mutations that do not change protein function, while acting to eliminate mutations that would. The preservation of genes among different species over vast periods of time is thus definitive proof of one face of natural selection—its power, in Darwin's words, to “rigidly destroy injurious variations.”

The book ends with two chapters of ‘afterdinner conversation’. The first is about the historical and ongoing rejection of broadly accepted scientific ideas by people with particular agendas. The second is about the decline of species in modern times. These chapters, although interesting, felt very much to have been ‘tagged on’ at the end, possibly to make the book a bit longer. I think this was unnecessary, and detracts from the book's main thesis.

Having said that, The Making of the Fittest is an excellent book, and highly recommended.

The above review was cross-posted from my Friends of Charles Darwin website.